The HGe 4/4 was the first electrical locomotive of the former Furka-Oberalp-Bahn. Today the FO is part of the Matterhorn Gottard Bahn (MGB).

These Locomotives were built in the 1920’s by the Schweizerische Lokomotiv- und Maschinenfabrik (SLM) and Maschinenfabrik Oerlikon (MFO), esspecially for the FO and the Brig-Visp-Zermatt-Bahn (BVZ) as HGe 4/4 I.

In 1940 the FO decided, just like the Rhaetian Railways to electrify the track with 11.000 V AC. These locomotives were built with a lightweight body and oil-colled transformers.

The Cog-system is System Abt. This system is developed by the Swiss Constructor Roman Abt (1850-1933) 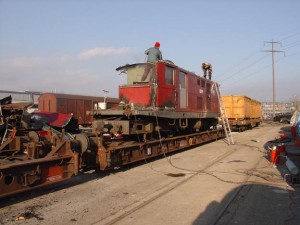