In 1862 the machinefactory “De Bruyn Kops en Backer” was founded. The name chanced later into Backer & Rueb and at the end into NV Machinefabriek Breda. In 1967 the company became a part of the RVS concern and ceased to exist in 1993.

The locomotives that were build often got the name “Backertjes”. A total of 306 steamlocomotives left the gate, of which 216 went to Dutch tramcompanies. Today several Backertjes are still in service at e.g. Hoorn-Medemblik anf the Museum Buurtspoorweg.

The original of this loco was scrapped by the RTM in 1956. Since 2010 people at the workshop of the RTM are rebuilding this little engine. 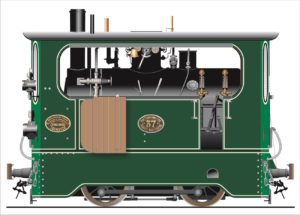