The Churer Pendelzug started its life in 1971. The original train consists of 3 carriages: a locomotive that seats passengers, a middlecarriage and an endcarriage with cabin. The numbers of these 4 original trains are:

The locomotive used to have a complete cabin at the rear side. So 2 windows, headlights and closinglights were installed. In 1979 2 additional trains were built. For these trains they used the 4 almost never used rear cabines from the original trains. The windows and headlights were welded shut but the lamphousing on the roof stayed. The numbers of these 2 new trains are:

The area were the trains run is between Thusis and Landquart, over Chur. In the old days they used to run over Filisur, Davos and St. Moritz. Per year the trains run about 120.000 – 180.000 km. The 5 trains together (numer 6 is always in reserve) are handling about 11% of the total kilometers run bij rolling stock of the RhB.

Between 1971 and 1979 the original 4 trains drove their kilometers. The color of the trains was the well-known red of the RhB, a color that was introduced in that time to replace the original green. Along the side they had a golden stripe and the original Rh B logo. On the front the black moustache was missing. Not very many colorpictures of those days can be found, although the trains were very modern in those days. They were the first to have thyristor-controlled motors, a novelty. This was probably the reason that the trains suffered noumerous problems in the first years. The personell had to get used to them. After a few years it was clear that they could run without any problem for a long period of time. Until today the trains each ran about 2.6 – 2.8 million kilometers.

The original trains had a second cabin at the rear, which was hardly ever used. The 4 cabininteriors were taken from the original trains and used in the additional 2 trains that were build in 1979. In the old cabinspace litte folding chairs were installed. The windows and headlights were welded shut, only the lamphousing on the roof remained.

During 1979 the two additional trains started their life. They were built as 3 carriage trains. They carried the newer Rhatische Bahn logo and a silver stripoe on the side and ofcourse the black moustache on the front. The differences between the old and the new trains were very small, some changes were made to the door-closing mechanism and some to the breakes. The endcarriages got a bigger first class compartement (3 windows in stead of 2). They drove between Filisur, Davos, Chur, Thusis, St. Moritz and Landquart. Every day about 500 kilometers.

During 1988 4 additional coaches were ordered to expand the capacity of the trains. The seating in these coaches was not facing eachother, but like in a bus. looking at the back of the head of the person in front of you. This brought an additional 68 seats to the trains. Train 513 and 514 did not get an extra carriadge. The appearence was still the same: red livery with new Rhatische Bahn logo, round frontlights and seperate closinglights. Plenty of pictures can be found on the internet

The biggest change during 2009 was af course the use of the rectangular headlichts with incorporated closinglights, as seen on all lokomotives of the RhB. 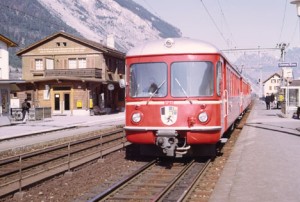 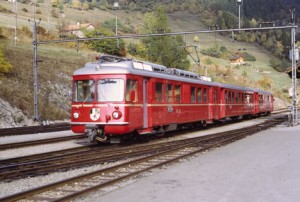 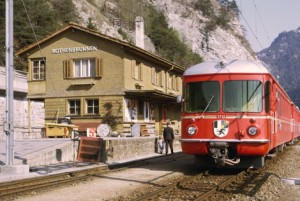 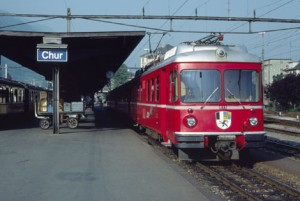 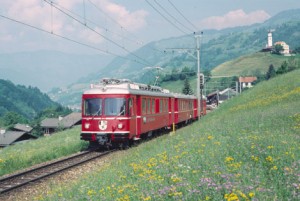 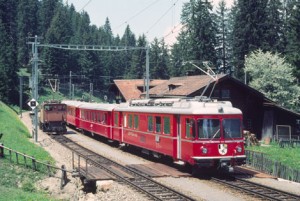 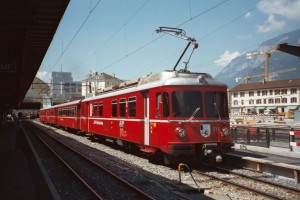 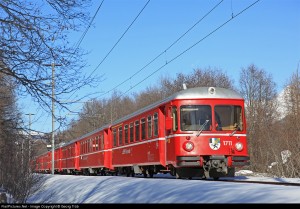 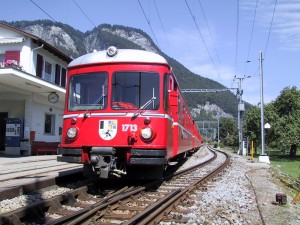 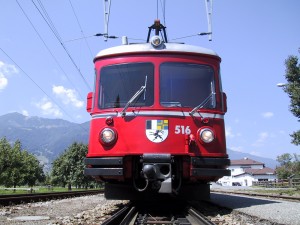 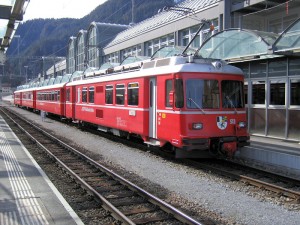